Since our founding in 1986, DFW Urethane has installed hundreds of commercial roofs. Our roofing expertise spans a wide variety of commercial and industrial environments, and also extends to insulation and sealing services.

Our satisfied customers attest to the fact that we’re the best in the business and we keep our promises: We guarantee that your roof won’t leak—just ask our customers. 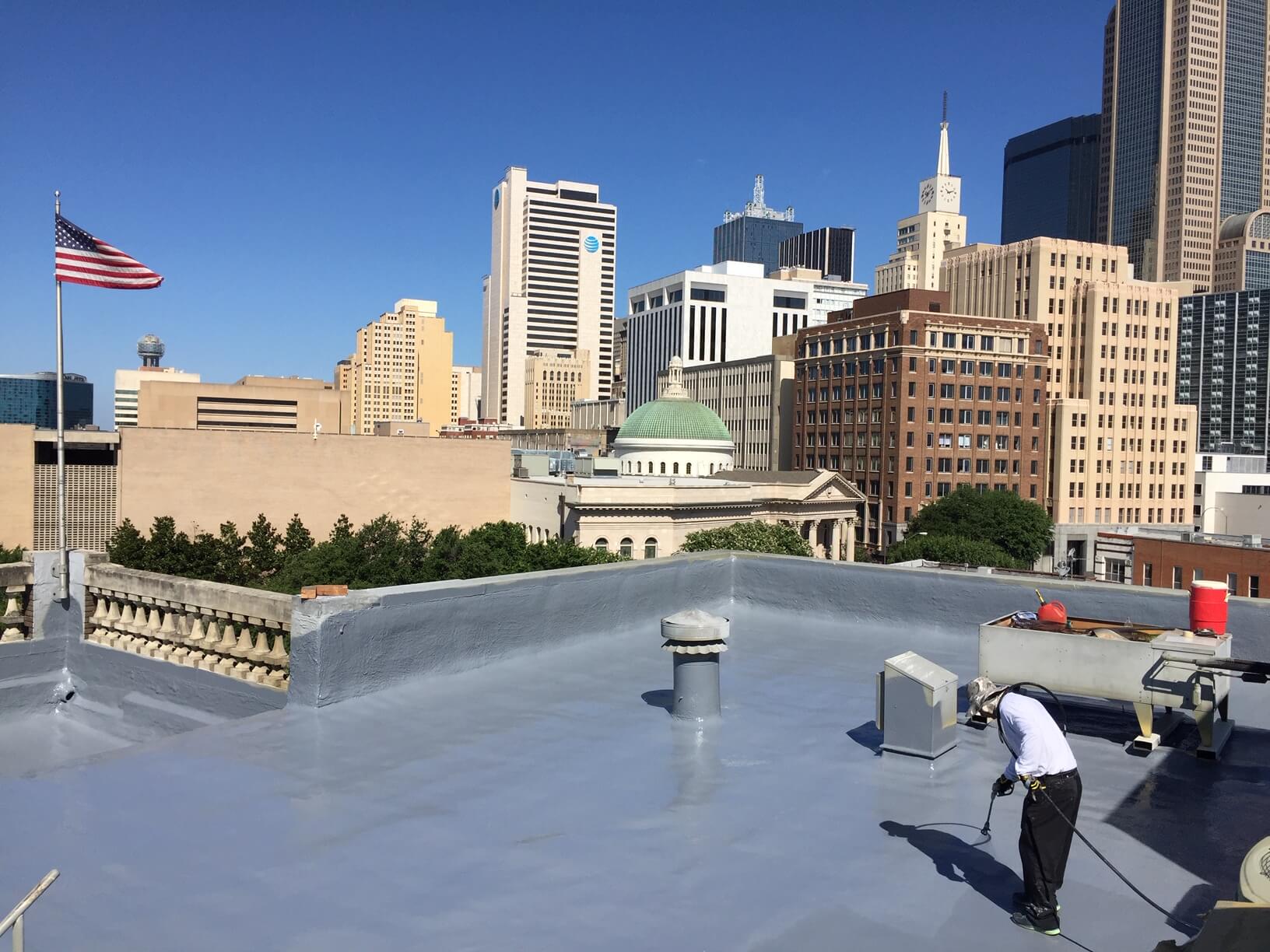 Quality control, backed by ISN safety standards, is fundamental to every DFW Urethane roofing project and is a big reason why we consistently deliver superior performance.

DFW Urethane excels in every one of these areas. Add in 30+ years of experience working with commercial roofs of all shapes and sizes, and there’s no comparison to the competition.

Safety is always a top priority with DFW Urethane. Every project is unique, so each job is analyzed individually to determine the necessary steps to achieve a safe working environment for both our employees and our customers. We comply fully with all OSHA safety recommendations.

Further, all of our technicians have completed safety and forklift training.

“Toolbox” meetings are held on the job site initially, before our technicians go onto the roof, so they know in advance the specifics of the building, where to set ladders and what they might encounter, ensuring all appropriate measures and precautions are taken.

Additional toolbox meetings are conducted as necessary to communicate with employees.

If you have your own safety program, DFW Urethane will coordinate closely with your safety personnel and guidelines. We also have safety data sheets (SDS) on every product being used readily accessible on-site in our job trailers.

We are highly selective in the materials we use. Not every contractor uses the same caliber of roofing products.

As certified contractors, we follow manufacturer recommendations and implement other steps to ensure that every roof we install is of the highest quality.

DFW Urethane’s equipment is the best on the market and time-tested. It is continually monitored by our technicians for faults or defects.

Many roofing materials must be kept within a tightly controlled range of temperatures and humidity to achieve the right mix, texture and fluidity of product when applied.

That’s why DFW Urethane has state-of-the-art heated trailers with sealed, insulated tanks to maintain materials at their peak performance.

We use wet bulb thermometers to determine humidity, making sure that materials are applied in the correct conditions, which will vary by the time of year, time of day, and geographic area.

Our technicians have been with us for many years. They are highly experienced, knowledgeable and committed to upholding the highest standards of excellence. Our staff also undergoes ongoing training.

A DFW Urethane owner is always on the job site to ensure the highest standards of excellence and safety. This also makes it easy for our clients to get quick answers to their questions.

On complex projects, we create a management plan that outlines the implementation and details what to expect during each phase.

Mapping out the project allows us to anticipate and address previously unforeseen issues. In addition, it helps facility managers communicate with others in their organization as necessary.

Virtually all projects are performed by in-house DFW Urethane employees, who have undergone stringent background checks and annual drug screening.

Our crew leaders, chief estimator, and project manager have each earned the SPFA Master accreditation.

Our constant attention to expertise, reliability, and training ensures that we uphold the highest levels of performance. On the rare occasions when we need to bring in subcontractors, you can be confident that they are well-qualified and closely supervised to maintain project quality.

Staying on the Cutting Edge of the Roofing Industry

DFW Urethane’s president, vice president, and team leader regularly attends the Sprayfoam Annual Convention and Expo, where DFW Urethane was nominated as a 2017 finalist for the Roof of the Year award for our work on the historic William Lipscomb Elementary School in Dallas, TX.

We are certified by all of the major manufacturers in the industry. As their certified installer, we are trained and authorized to use manufacturers’ materials and to offer their product warranties, which are transferable with advance written notice.

Influential in the Industry

DFW Urethane works diligently to achieve and maintain the highest levels of roofing certifications available throughout the industry.

Just as important, we are frequently sought out to help advance the industry: manufacturers regularly send their latest products—or those they are developing and fine-tuning—to DFW Urethane for testing.

We apply new materials to our own facility’s roof, as well as to manufacturers’ “roof farms.” We monitor their wear, record how they hold up to severe weather, and collect additional performance data. Our real-world evaluations inform further product development and influence which products are released to the market.

The opportunity to conduct our own performance tests also ensures that our customers are benefiting from the very best state-of-the-art products on the market.

Committed to energy efficiency and turning the world green—one roof at a time—DFW Urethane is also a proud LEED Member Contractor.

BBB Dallas and BBB Fort Worth

Our Team—The Best in the Business

While our company has marked 25 years in business, DFW Urethane’s principal owners, John Ewell and Benjamin Hurd, have spent even longer in the industry, as have several of our technicians.

This longevity represents invaluable experience—knowledge of the chemicals, equipment, and processes associated with installing roofing and insulation.

Responsible for sales, estimating, and customer relations, John has been in the industry since 1980, when he joined one of the largest roofing companies in the country at the time, VanWall. He left in 1986 to co-found DFW Urethane with partner Benjamin Hurd.

John has completed numerous training workshops held by roofing manufacturers as well as Spray Polyurethane Foam Alliance (SPFA) accreditation courses. During his three decades in the roofing industry, John has actively participated in the SPFA and was selected to serve on its technical committee, along with product manufacturers and technical experts.

In this industry leadership role, representing roofing contractors everywhere, John provided input based on real-world installations and influenced how products are used in the marketplace. He has also helped write specifications used by cities and states for using roofing products that reflect how these roofs are actually installed.

This program required that John had previously completed the SPF Assistant, SPF Roofing Installer, and SPF Master Installer PCPs, followed by a complex written examination, proof of completion of a project with at least 500,000 square feet of roofing, proof of a current OSHA 30-hour card, and several other requirements.

What he enjoys most about his work is being part of a team of problem-solvers:

“Almost every customer has one or more special challenges with their roof that other contractors have attempted to fix over the years, but couldn’t,” he says. “This is where DFW Urethane really shines. We can fix your leaks and save you money. If you can do that, it’s easy to make a friend out of every customer.”

Leading DFW Urethane’s operations, co-founder Benjamin (Ben) Hurd has been in the roofing industry since the late 1970s. During his 30+ years of experience working on the major types of commercial roofs, he has installed an estimated 15-18 million square feet of roofing in virtually every type of environment.

This has meant constantly keeping up with the latest industry developments as roofing products have evolved.

In more recent years, he has installed high-tech commercial roofs for companies including L-3 Communications, Texas Instruments, Anheuser Busch, Pepsi, and one of the largest search engines in the country.

This program required that Ben had previously completed the SPF Assistant and SPF Roofing Installer PCPs, followed by a demonstration, during an observed field exam, that he has extensive experience and competence spraying SPF in a variety of applications on a variety of roofs and roofing materials.

Ben’s greatest satisfaction and rewards come from happy customers who are not only delighted with their roofs, but who become friends, welcoming him for a cup of coffee on a rainy day.

A 30-year-plus roofing industry veteran, James has been working alongside DFW Urethane co-founder Ben Hurd since 1978. He possesses an unparalleled understanding of the highly sophisticated equipment required to apply a variety of commercial roofs.

James is well-versed in all types of elastomeric coatings, including acrylics, single- and two-component urethanes, silicones, and epoxy. To advance his knowledge and ensure that he employs the best practices in a variety of commercial roofs, James continually undergoes rigorous hands-on training offered by manufacturers and industry experts.

He has completed training courses for contractors from BASF, Neogard, GE, NCFI, USCS, Carlisle, GAF United Coatings, Everest Systems, and multiple SPFA accreditation courses. James is a treasured member of the DFW Urethane team, a tremendous asset to our customers and an exemplary representative of the industry.

Chad grew up in the roofing industry surrounded by the best. He has trained and worked for years alongside DFW Urethane VP/co-founder Ben Hurd and James Webb, two of the industry’s top technicians, and has learned the art and science of estimating from his father, company president John Ewell.

During the Sprayfoam 2017 Annual Convention and Expo, Chad completed the rigorous SPFA Professional Certification Program (PCP) in Roofing, becoming an SPFA PCP Certified Master Installer in Roofing. This program required that Chad had previously completed the SPF Assistant and SPF Roofing Installer PCPs, followed by a demonstration, during an observed field exam, that he has extensive experience and competence spraying SPF in a variety of applications on a variety of roofs and roofing materials.

His lifelong exposure to the talent and knowledge on the DFW Urethane team cannot be bought, and he absorbs every bit of his training like a sponge, all to the benefit of DFW Urethane customers.

Jacinto has been with DFW Urethane since 1999. Originally hired to help keep shop equipment running, he soon became an invaluable member of the team with his expert welding skills.

Over time, after working day in and day out with Ben Hurd and James Webb, Jacinto trained to become a roofing technician and is now one of the best in the business.

In true family style, Jacinto’s son, Vielman, is now working for DFW Urethane and currently training as a roofing technician as well. Jacinto and Vielman are both making a positive difference for our customers as members of the team.

Vielman is another one of our success stories at DFW Urethane. He joined our team in 2008 and quickly impressed us all with his hard work and dedication to quality.

Trained by Ben and working long under the guidance and direction of James, Vielman has shown an impressive ability to quickly and accurately process all critical details of every roofing project and to efficiently put the plan for each unique roofing solution into action.

He is a major asset to DFW Urethane, and we are proud to have him aboard.